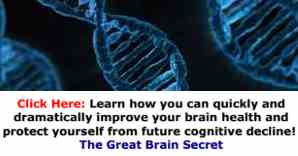 The fact that mental exercises can bolster your brain has even been discovered by the press. The Daily Mail in England reports that volunteers aged 65 and over who did END_OF_DOCUMENT_TOKEN_TO_BE_REPLACED

The largest risk of getting Alzheimer’s disease is END_OF_DOCUMENT_TOKEN_TO_BE_REPLACED

Environmental scientists have been sounding the alarm for years but not much is being done to stop the poisoning of our supply of food, air, and water. For every step forward we take, we slip back even further END_OF_DOCUMENT_TOKEN_TO_BE_REPLACED

Alzheimer’s Disease is one disease/disorder that causes END_OF_DOCUMENT_TOKEN_TO_BE_REPLACED