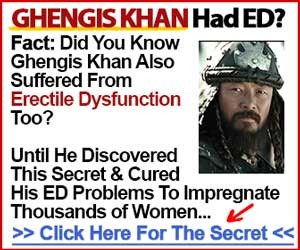 A Look At The Three Causes Of Erectile Dysfunction

Erectile Dysfunction is no laughing matter. It can hit any man, of any age, but of course, is much more prevalent among older men.

Once you hit forty, you’re increasingly likely to suffer from ED. It’s important to understand, however, that not every case of sexual dysfunction is an ED problem.

Sooner or later, every man faces the occasional performance problem. When it happens, you’re going to feel bad about it.

You’re going to feel like a failure, and let’s face it, like less of a man, but unless it’s happening consistently and over a period of time, it’s not ED.

Here are some of the more common causes of erectile dysfunction:

The sad truth is that in a significant number of cases, erectile dysfunction is a condition we bring upon ourselves.

Even when these things aren’t the outright cause of ED, they’re almost certain to be contributing factors that make your condition worse.

This is a big, expansive category that covers a lot of ground, but in a nutshell, here’s what you need to know.

Eating lots of leafy greens, whole grains, oysters, watermelon, and blueberries (most any fruit will work, really) will help you give your body all that it needs to improve the quality of your erections, while cutting out processed foods, cigarettes and alcohol will provide further benefits.

Add in a healthy dose of exercise at least three times per week, and you’re well on your way to better sexual health!

The Meds You Take

You’ve almost certainly seen various medications advertised on TV. The funny part about those ads is that they spend almost as much time talking about the side effects of their latest “wonder drugs” as they do about its supposed benefits.

Unfortunately, many of the drugs on the market today that are designed to treat various conditions, have side effects that include the degradation of male sexual performance. The most common of these are blood pressure medications, but there are many others.

The good news is that in many cases, there are often (but not always) alternatives to the meds with these side effects. If that’s the case, your doctor can prescribe you an alternative to help alleviate the problem.

Your Big Brain Working Against Your Little Brain

Many of the causes of erectile dysfunction are actually psychological. Understand that this is not the same as saying that it’s all in your head, because it’s not.

Psychological issues can easily lead to a variety of very real physical ailments. If that surprises you, it shouldn’t.

Stress can lead to heart disease, so why can’t other psychological issues lead to ED? It’s a pretty common, fairly well understood phenomenon.

Stress is, in fact, one of the leading causes of ED, which makes it a particularly nasty condition (because it also can lead to heart troubles, so it hits you twice).

Long before stress kills you though, it will impact your sex life in a major, and entirely negative way.

Our modern society is filled to the point of overflowing with stress triggers. We work too many hours. We don’t take enough vacations, and even when we do, we tend to bring our work with us, thanks to the advent of the smart phone, which is both a blessing and a curse.

Yes, it lets us keep in touch with friends and families no matter where we are in the world, but it also means that we have the tendency to never unplug. We need that. We need time to decompress and relax. Sure, you can run at top speed for a while, but if you do it too long, you’ll burn yourself out.

If you keep going much beyond that, your problems will only worsen with time. Why would you want to do that to yourself? It simply makes no sense.

Depression is another common cause of ED, and let’s face it. When you’re depressed, sex is about the last thing you’re thinking of.

Stress is a particularly nasty cause of ED, because most of the antidepressant medicines available only make ED worse.

Depression is insidious on another front as well, because it’s easy to get caught in a negative, self-reinforcing feedback loop trap.

Once you’re caught in that trap, it can be notoriously difficult to get out of it.

The risk, however, is that a failure to perform sexually can sometimes lead to depression, which can cause ED.