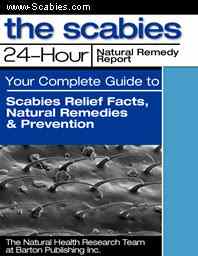 Scabies is a very contagious skin condition caused by contamination with parasite microscopic mites. The mite responsible for causing scabies in humans is called Sarcoptes scabiei var. hominis and it can be easily acquired through contact with infested people or contaminated objects. Due to its very contagious character, scabies is very likely to cause serious epidemics in overcrowded orphanages, nursing homes, kindergartens and schools. In order to prevent the spreading of scabies, doctors recommend people with the condition to avoid entering in contact with others.
Scabies mites can live for up to a week without a human host. Thus, bed linens, towels, clothing and all the other personal items of people affected by scabies need to be properly washed in hot water to avoid a second infestation.
As an extra precaution, all the people who have entered in contact with patients diagnosed with scabies also need to follow an appropriate medical treatment, even if they don’t show any clear signs of contamination. Scabies has an incubation period of around 1-2 weeks and most symptoms occur within this period of time. Once the parasite mites contaminate the skin, the first signs of scabies are skin inflammation, rash and persistent itch.
Scabies mites are microscopic organisms and their presence on a human host can be difficult to reveal. Also, most of the symptoms generated by scabies are unspecific and sometimes they can be misleading in the process of diagnosing the condition. The first revealing signs of scabies usually emerge a few weeks after infestation, allowing the parasite mites to proliferate and to spread in various regions of the body within this period of time. The presence of scabies in people can only be confirmed by careful physical examinations.
Soon after contamination, female scabies mites burrow into the skin and lay their eggs. The mites’ eggs contain substances that are very toxic to the human body, generating allergies and rash. After they hatch, the larvae climb to the skin surface, where they continue to develop into adult mites. Even if the larvae are spotted and removed from the skin, they can still survive for up to a week.
Scabies mites tend to infest less exposed regions of the skin. The female mites usually lay their eggs under the nails, in the skin folds between the fingers and toes, around the elbows, armpits, buttocks, or in the pubic region. In very young children or elderly people, scabies mites can even infest the scalp and face.
The symptoms of scabies occur as a result of allergic reactions to the mites’ eggs and feces. Within the first week from infestation, people with scabies develop rashes on the affected regions of the skin.
Later symptoms include the presence of burrows, crusty aspect of the skin, blisters, pustules and even nodules. If the infestation with mites is not quickly eradicated, people affected by scabies are at risk of developing serious bacterial or fungal infections. If scabies is not appropriately treated, it can lead to skin disorders such as impetigo.
If you or a loved one has scabies, I’d like to invite you to try the powerful, natural remedies found inside The Scabies 24-Hour Natural Remedy Report, your complete guide to Scabies Relief Facts, Natural Remedies and Prevention. Click the link to Get The Scabies 24-Hour Natural Remedy Report NOW.
Share Tweet Share Pin it Share Share Share