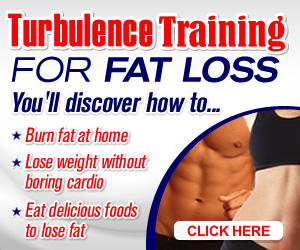 You know who is your worst enemy in the fight against fat?

Well-meaning fitness professionals that don’t want to make you feel bad for being lazy and eating crap. That’s who.

They write articles about how “diets are bad”, how you can lift soup cans and get fitness model arms, and how you should exercise in the nice and easy “fat burning zone” to get results. Basically, they give you what want to hear – plenty of excuses for avoiding hard exercise and strict nutrition (the real keys to fat loss).

But I don’t. You’ll get no such excuses from me.

Here’s the real deal on fat loss. You have to work hard in your workouts and even harder on your nutrition if you want results. Or you can take the politically-correct easy way out and have the same body in 3, 6, and even 12 months from now.

Love me or hate me, I promise you results. Let’s take a look at why END_OF_DOCUMENT_TOKEN_TO_BE_REPLACED

I was at a big event last week and was reminded how important it is to have strategies for this season of high-calorie parties and busy schedules. But I get ticked off by the tired old suggestions you find on the Internet or in magazines like Woman’s World.

Often the suggestions are lack any substance, because the writers don’t want to imply you actually have to make a sacrifice to succeed. They make fat loss sound easy, as if all you had to do was park at the far end of the parking lot and you’d burn all the calories from 5 shortbread cookies.

Well it doesn’t work that way…So here are my politically incorrect, unique Turbulence Training strategies to help you keep off the holiday pounds.

By the way, I “borrowed” a few ideas from contestants in my Turbulence Training Transformation Contest. The Transformation is rocking with social support and END_OF_DOCUMENT_TOKEN_TO_BE_REPLACED

Food poisoning is often caused by eating organisms or toxins present in food or drinks. Staphylococcus or E. coli is one of the commonest bacteria which results in food poisoning. The reason this kind of a contamination happens is due to the  improper handling of the food or drink, . Even though it is a very common condition it can get really bad depending upon the degree of contamination.

Some common foods that can cause food poisoning if proper care is not taken consist of raw poultry, unpasteurized milk, red meat, poisonous mushrooms, pesticides on fruits and vegetables, egg and raw egg products, raw meat and even water.

Sometimes the symptoms are so mild that we hardly register it in our minds. Normally the symptoms develop within one hour but it can also show up later on, between 12-48 hours after ingesting the contaminated food. It can lasts for more than two days but, depending on its seriousness, it may take around a week to recover.

You may have bouts of vomiting, abdominal cramps and pain, diarrhea and similar other pains. If the symptoms are very serious you may have chills and fever, bloody stools, dehydration, muscle aches and weakness. In rare cases it may even lead to brain damage causing paralysis or death.

Some of the common causes of food poisoning are pesticide, chemicals, heavy metals, parasites, fungi, viruses and bacteria.

The trouble with pesticides and weedkillers is that it ultimately contaminates the foods we ingest.  This in turn has to impact on the gut microbiota or intestinal bugs.

The microorganisms in our guts perform a host of useful functions, such as fermentation of unused energy substrates, training the immune system, preventing growth of harmful, pathogenic bacteria, regulating the development of the gut, producing vitamins and producing hormones to direct our bodies to store fats.

Episodes of food poisoning could in effect cause an imbalance in the populations of microorganisms in our gut and depending on how the balance is restored within our gut it could result in some people putting on extra weight.

Regrettably the big chemical companies advise farmers to spray their wheat crops with the  glyphosate a few weeks before harvest – to kill the crop and remove weeds to make it easier for them to harvest.

Unfortunately for us glyphosate doesn’t break down immediately, and can follow the grain into food manufacturing processes. Tests on pesticide residues in food have found that in the UK, for example, as much as 30% of UK bread contained this weedkiller.

Bacteria are a major culprit for food poisoning, due to their capacity to multiply.

To prevent the contamination of our food and drink we should make sure that our kitchens are clean and that naturally includes the storage container.  We should always handle raw and cooked food with the proper precautions and cook foods to the maximum temperature to avoid the presence of bacteria.  Canned foods should be heated before tasting.

You can stop outbreaks of food poisoning by either by minimizing the spread of bacteria, preventing their growth or killing bacteria with proper measures of cooking.

Should you suspect that you or someone in your family has contracted food poisoning the best thing you can do is take them to a medical practitioner for treatment.

Another food contamination is that of Genetically Modified Organisms.  Various scientific studies have proved that GMOs can be harmful to human health and yet they persist in trying to force it down our throats.

I personally feel that the more we know where our food comes from, what is being done to our foods before and after harvest, the better informed choices we can make the healthier we will be.

CLICK THIS LINK to find out HOW TO GET RID of FAT -BUILDING BACTERIA From Your Body – This is currently being suppressed by the greedy multi-billion dollar pharmaceutical industry who are doing everything in their power to keep this discovery hidden from the public.

Most of us unfortunately know that with the creep of middle age extra pounds tend to gravitate to our midriff – the dreaded middle age spread. However, new research suggests that there is a less obvious reason for the dreaded spare tire

and that there is another less visible reason to fucus on our gut if we want to loose weight.

Science has taken a closer interest in the relationship between our intestinal bacteria and weight gain.

Scientist revealed that our intestines harbor a whole world of bacteria aka gut microbiota that may play a considerable role in whether your body will store the food you eat as extra pounds. It stands to reason that this complex community of microorganism species living in our digestive tracts are not there by accident and that there would be a relationship between the gut bacteria and your weight.

Gut microorganisms benefit us by gleaning the energy from the fermentation of undigested carbohydrates and the subsequent absorption of short-chain fatty acids.

Our bodies each carry about 100 trillion microorganisms in our intestines, a number ten times greater than the total number of human cells in the body.

Research suggests that the relationship between gut flora and humans is not merely commensal or non-harmful coexistence, but rather a mutualistic relationship.

The microorganisms perform a host of useful functions, such as the previously mentioned fermentation of unused energy substrates, training the immune system, preventing growth of harmful, pathogenic bacteria, regulating the development of the gut, producing vitamins and producing hormones to direct our bodies to store fats.

The populations of microorganisms vary widely among different individuals but stay fairly constant within an individual over time, even though some alterations may occur with changes in lifestyle, diet and age

For many people putting on the extra weight could be the result of an imbalance in the populations of microorganisms in your gut.

How to Lose Man Boobs The Right Way 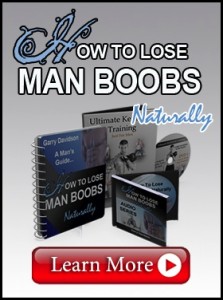 Living with man boobs can be so detrimental for a man that life itself can become such a challenge. There is perhaps nothing more humiliating to be mocked and laughed at for having noticeable male breasts. So not only do you have to deal with having the actually man boobs but also bear the brunt of being a laughing stock.
Man boobs, also known as gynecomastia, generally come about as a result of an imbalance of testosterone and oestrogen. When the level of oestrogen outweighs the level of testosterone the chest area begins to develop and grow breast tissue.  Treatment for such an imbalance of hormones can be treated by taking medication to correct the level of both testosterone and oestrogen.
In cases where diet and obesity are the reasons behind man boobs a strict fitness regime can be followed and have quick positive results. But it is crucial that whatever course one chooses to take, that any decision is made based on information and knowledge. There are no guarantees that man boobs will disappear so it is paramount that any decisions made are made for the right reasons. Choosing the right way to treat man boobs is without doubt half the battle and the best way to settle any psychological damage.
Natural approaches and way to tackle man boobs are not only safer but can also be cheaper but for those who want rapid results and to rid themselves of their breasts that bit quicker then liposuction or surgery are the way to go. Whichever option you choose to take, make sure it is the right one and take time to consider all your options before rushing into anything that could have anything but positive results.